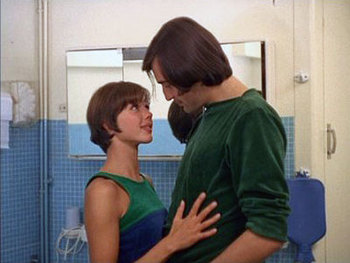 La Collectionneuse ("The Collector", though generally left untranslated in English countries because of other works with that title) is a 1967 film co-written and directed by Éric Rohmer, labeled as #4 of his Six Moral Tales, but actually the third one made and the first one released. It was also the first of the Tales made in color.

Adrien (Patrick Bauchau) is an art dealer with aspirations to own his own gallery. While attending a party held by a rich friend, he accidentally walks in on a man and woman having sex. When his fiancée Carole (Mijanou Bardot)note Brigitte Bardot's sister and Bauchau's wife goes to London for a month, he rejects her offer to join her in favor of spending time at the rich friend's rented house on the Riviera, where he plans to hang out with his painter friend Daniel (Daniel Pommereulle) and relax in undistracted peace.

When they arrive at the house, they learn there's another guest staying there, Haydée (Haydée Politoff), a promiscuous young woman who Adrien recognizes as the one he walked in on during sex (and she recognizes him as well). Adrien is intrigued by her but also disturbed by her sexual activities, calling her a collectionneuse, a collector of men. She eventually has an affair with Daniel but still tries to work her charms on Adrien, whose quiet vacation has now turned into a maddening series of mind games between him and Haydée.