Film / A Colt is My Passport 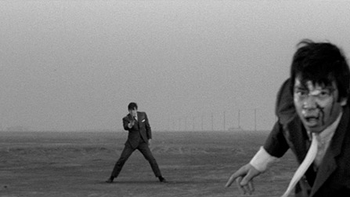 A Colt is My Passport is a 1967 film directed by Takashi Nomura.

Kamimura (Joe Shishido) and his junior partner Shun are hired by yakuza boss Senzaki to assassinate one of Senzaki's rivals, Shimazu. After carefully scouting out Senzaki's home and tracking his movements, Kamimura gains entry into an apartment across the street from Shimazu's home and shoots him, completing the contract.

Kamimura and Shun zip over to the airport, intending to board a flight for France. Unfortunately Shimazu's gang has moved even quicker, and has staked out the airport. In fact, Kamimura and Shun are captured by members of Shimazu's gang, but the badass Kamimura fights his way out. The two hit men, unable to flee the country by plane, go to the waterfront and hide out in a sleazy inn, hoping to escape by boat. Shimazu's goons soon figure this out as well. Even worse for Kamimura and Shun, their boss, Senzaki, has made peace with Shimazu's son and successor. Young Shimazu demands only one thing: the lives of the men who killed his father.