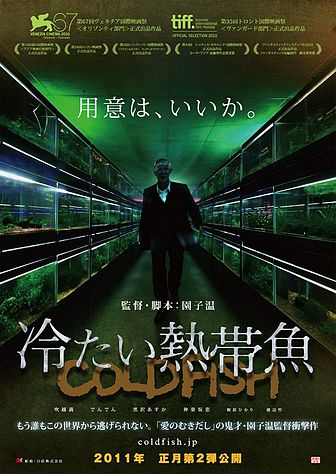 A 2010 film written and directed by Sion Sono, Cold Fish tells the story of a quiet fishmonger named Nobuyuki who once again gets into trouble because his daughter gets caught stealing in a shop. The cheerful and charismatic Yukio, who also happens to be a fishmonger, bails him out. Yukio suggests that Nobuyuki’s daughter may work at his shop (which is significantly larger than Nobuyuki’s) and that he and Nobuyuki can work together as business partners on top of that. Nobuyuki agrees, not yet knowing that the man he made a deal with is actually a psychopathic Serial Killer who has murdered well over 50 people. Soon Nobuyuki is blackmailed into assisting Yukio in what he calls making his victims "disappear". This is the beginning of a nightmare of Gorn and humiliation.