Film / My Night at Maud's 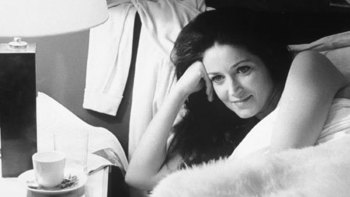 My Night at Maud's (French: Ma nuit chez Maud) is a 1969 film from France, directed by Éric Rohmer.

The protagonist is an unnamed 34-year-old man (Jean-Louis Trintignant) who works as an engineer at the Michelin plant in Clermont.note Clermont would be the setting for another film made around the same time, the documentary The Sorrow and the Pity. The man is an observant Catholic who goes to midnight mass on Christmas Eve, but his religious piety does not prevent him from being infatuated with a beautiful blonde who rides about town on her bicycle.

The man runs into his old school friend Vidal. Vidal is both a professor and a Marxist, and the two start in on a debate about Pascal's Wager

and the nature of God. Clermont gets slammed with snow on Christmas night, and the man can't make it out to his home in the country, so Vidal invites the man to stay overnight in the home of his girlfriend Maud. Maud (Francoise Fabian) is an atheist like Vidal, and a sexually adventurous libertine to boot. Maud, who is obviously intrigued by Vidal's friend while also amused at his religious faith, sets out to seduce him.

This film was the third of Rohmer's Six Moral Tales, a series of six films that weren't really a series, but were connected by a shared theme of human morality. It's Rohmer's most famous film and often considered his best. My Night at Maud's was nominated for an Oscar for Best Foreign Language Film, but lost to Z, another film that starred Jean-Louis Trintignant.