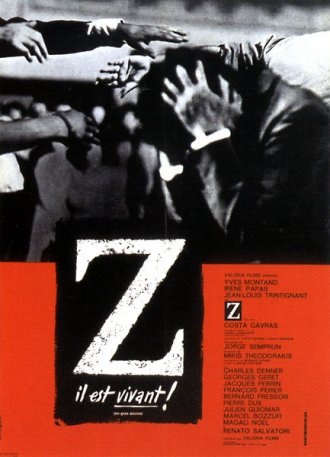 "Any resemblance to real events, to persons living or dead, is not accidental. It is DELIBERATE."
— The opening crawl.
Advertisement:

A 1969 Algerian–French political thriller based on the assassination of Greek politician Gregoris Lambrakis, directed by Costa-Gavras and starring Jean-Louis Trintignant and Yves Montand.

In an unnamed country (hinted to be Greece), an outspoken politician (named only as "the Deputy") is struck down after a peace rally and hospitalized. When he dies, a public prosecutor (Trintignant) is sent to look into his death and finds corruption, coverup, and much more.

Notable for being darkly humorous and satirical, but still having quite a chilling ending.

Public Prosecutor: "Then, I assume that the fact that you were on the scene of the murder was purely casual."
Stenographer: "Excuse me, Mr Prosecutor. Must I write «murder»? You have said «murder»."