Film / Youth of the Beast 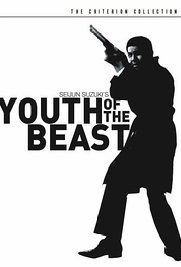 Youth of the Beast is a 1963 Japanese yakuza thriller film directed by Seijun Suzuki.

Joji "Jo" Mizuno (Jo Shishido) comes into a sleazy nightclub run by the Nomoto gang. He runs up a huge bill, and when he refuses to pay, is hauled into the Nomoto gang's office. After he proceeds to beat up one of the mooks who dragged him in, gang boss Tetsuo Nomoto hires him on the spot. He goes to work as an effective enforcer for the Nomoto gang, running interference against the Sanko gang. However, once Jo learns that the Nomoto gang has a huge drug buy in the works, he goes to the Sanko gang and offers to betray his own gang.

Why? Because Jo has hidden motives. It turns out that he's not really a gangster after all. He is in fact an ex-cop who went to jail when a Cowboy Cop operation of his went awry. While he was away his old partner Takeshita killed himself...or so the police think. Jo is sure that Takeshita was actually murdered and that someone in the Nomoto gang was responsible. He has vowed to find out who did and to "kill the killers".