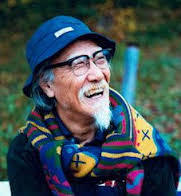 Japanese Auteur Seijun Suzuki (born Seitaro Suzuki, 24 May 1923 – 13 February 2017) was a filmmaker, actor, and screenwriter who was perhaps best considered the anti-Kurosawa. His films are known for their jarring visual style, irreverent humour, and nihilistic Rule of Cool sensibilities

Suzuki earned his reputation on the 40 B-movies, mostly Yakuza Films, that he made for Nikatsu between 1956 and 1967. Growing bored with the generic mobster, delinquent, and girl-in-trouble fare that the studio gave him to direct, Suzuki started experimenting with lighting, color, and editing, focusing on the visuals and paring the script down to the absolute minimum necessary to carry the story, and sometimes even less. His increasingly surreal style drew the ire of the studio, which resorted to cutting his budgets in an attempt to rein him in, which only led to Suzuki becoming even more creative, and ultimately forced him to film his magnum opus Branded to Kill in black and white. Fed up, the studio fired him in 1967 shortly after Branded to Kill was released, on the grounds that his films "made no money and made no sense." Suzuki successfully sued for breach of contract but was blacklisted for a decade as a result, forcing him to turn to acting and screenwriting to make a living.

Suzuki's signature style includes surreal sets and backdrops, highly saturated colors, long, silent interludes without dialog or even sound, and a sensation that the events of the film have become unmoored in space, with characters in the same scene often being filmed against wildly different backgrounds or even in different locations.

Suzuki remained largely unknown outside of Japan until a series of theatrical retrospectives in the mid 1980s, home video releases of key films in the late 1990s and tributes by such acclaimed filmmakers as Jim Jarmusch, Takeshi Kitano, Wong Kar-wai and Quentin Tarantino signaled his international discovery. Suzuki had continued making films, albeit sporadically. Nowadays he was more commonly recognized as an actor for his numerous roles in Japanese films and television.