Film / Yongary: Monster from the Deep 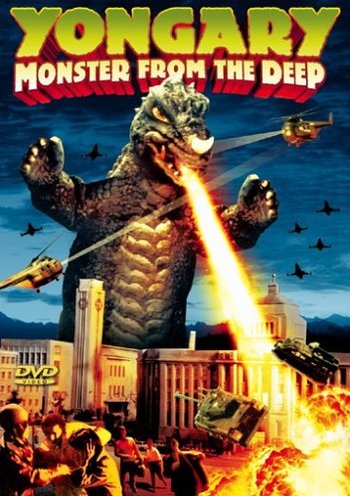 Yongary: Monster from the Deep is a 1967 South Korean/Japanese Toku Kaiju film directed by Kim Ki-duk and featuring special effects by Kenichi Nakagawa. An attempt to ape the success of the Godzilla and Gamera series, it tells the story of a monster awoken by nuclear weapons, which then rises up to wreak havoc on a populated city. Never Heard That One Before, right?

Remade as a 1999 film intended to ape the success of Godzilla (1998), simpily titled Yonggary. The following year, yet another remake, titled either titled 2001 Yonggary or Reptilian depending on the market, was released. Also featured on the Netflix revival of Mystery Science Theater 3000. For the recap, go here.

Yongary: Monster From The Deep Provides examples of:

The 1999 Remake and 2001 special edition include examples of: