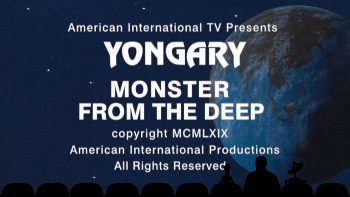 "Whoa! That is a long title."
Kinga Forrester: Buckle up, buttercup! Your experiment this week is a South Korean monster movie that's long on smashing, and short on anything approaching human pleasure.
TV's Son of TV's Frank: It makes Gamera look like a movie... that's... a billion times better than Gamera.