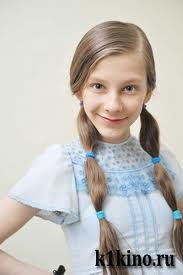 Арзамасова, Елизавета Николаевна.
Yelizaveta Nikolaevna Arzamasova (born March 17, 1995 in Moscow, Russia) is a Russian actress and singer. She began acting when she was four, and has appeared in both theater and film roles. Her best-known role so far is as the young genius Galina Sergeevna in the Sitcom Daddy's Daughters, which has led to her taking more roles in big productions. She says her favorite performers are Jack Nicholson and Liza Minnelli.