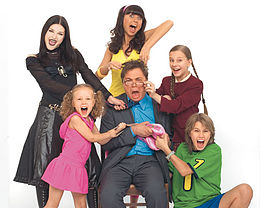 Ждут его дома всегда...его папины дочки.note In English: "At home, his daddy's daughters are always waiting for him" (line from the opening song)
Advertisement:

The show is about the life of Sergei Vasnetsov (Andrei Leonov), whose wife Ludmila (Nonna Grishaeva) left him to raise their five daughters (Miroslava Karpovich, Anastasia Sivaeva, Darya Melnikova, Liza Arzamasova, and Katya Starshova) in Moscow.

For a couple of years, the show kept this format, but then Ludmila returned and Sergei went home to Krasnoyarsk for a while. Eventually, they reunited and had a son, while the older daughters have begun to work or to study in universities.

The show claims to be Russia's first original sitcom, and has received several awards.