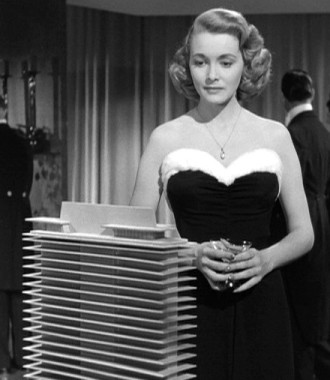 So this is what the building she's in looks like.
Number Two: Over the last thirty years, Virtucon has grown by leaps and bounds. About fifteen years ago, we changed from volatile chemicals to the communication industry. We own cable companies in thirty-eight states.
(the thirty-eight states illuminate on a map)
Number Two: In addition to our cable holdings, we own a steel mill in Cleveland.
(a steel mill miniature illuminates in Cleveland)
Number Two: Shipping in Texas.
(a model ship off the coast of Texas illuminates)
Number Two: Oil refineries in Seattle.
(a model oil refinery illuminates in Seattle)
Number Two: And a factory in Chicago that makes miniature models of factories.
— Austin Powers: International Man of Mystery
Advertisement:

Models of larger things are often used in fiction for a variety of reasons. Heck, if there isn't an immediate thing happening with the model in one scene, it's likely something will happen later.

One common use is models to describe plans (that will go wrong of course). Often overlaps with The Big Board, Exposition Diagram and Planning with Props.

Another is a Corrupt Corporate Executive showing the plans he makes for some place he is going to rebuild after tearing down some place (that the heroes have to save).

Sometimes a model can actually be one of the special effects props on a show, thrown in as a nod to attentive fans.

Not to be confused with Fashion Model.