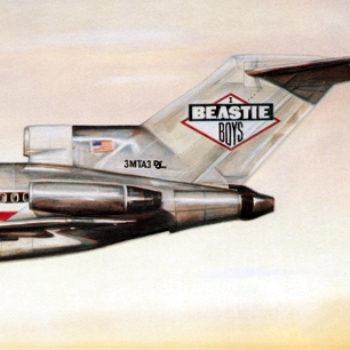 Your mum busted in and said: "What's that noise?!"
Aw, Mum, you're just jealous: it's the BEASTIE BOYS!
Advertisement:

Licensed to Ill is the debut album recorded by American Hip-Hop artists The Beastie Boys. It was released through Columbia Records (via the Def Jam label) on November 15, 1986.

At the time, it surprised many listeners by being the first Hip-Hop record to break to the mainstream and even get into the Billboard charts. Another album from that same year which showed the commercial viability of hip-hop acts was Raising Hell (1986) by Run–D.M.C., which also became an overnight sensation.

However, Licensed to Ill was especially notable because all members were white middle-class boys of Jewish descent, who nevertheless managed to overcome prejudices and got acclaim and respect from within the hip-hop community itself. Much had to do with the fact that the Beastie Boys showed off great rapping skills, clever sampling and an overall creative and fun party atmosphere, exemplified by the hits "(You Gotta) Fight for Your Right (To Party)" and "No Sleep Till Brooklyn".

The Beasties themselves, however, would endure a Creator Backlash about this album. They felt they were too much pigeonholed as mindless "party music" and their lyrics on this album were a bit too puberal. Also, their Signature Song "Fight for Your Right (To Party)" was actually meant as a tongue-in-cheek jab at the same "frat bro" culture they were accused of promoting, but most fans didn't get the joke. As a result, Licensed to Ill became an Old Shame to them, and their followup would be the more mature New Sound Album Paul's Boutique (1989). Nevertheless, Licensed to Ill is still a classic and regarded as a cornerstone in the history of hip-hop and pop music in general.