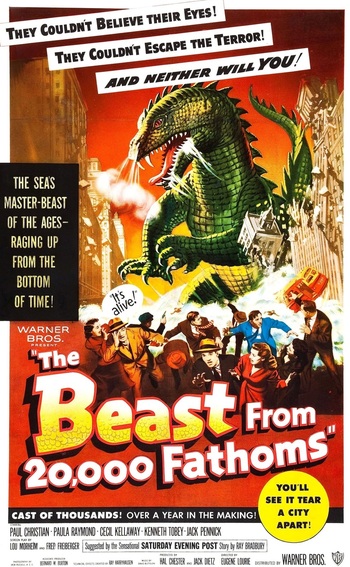 The first giant monster movie of the '50s — reviving the genre after a hiatus that dated back to 1933's King Kong — this film also introduced the theme of the atomic bomb to the genre. It kicked off a hefty trend, including The Amazing Colossal Man, Attack of the 50-Foot Woman, The Giant Behemoth, The Giant Claw, Gorgo, It Came from Beneath the Sea, The Monster That Challenged the World, Reptilicus, Tarantula! and Them!. And, last but not least, it was the primary inspiration for the most famous gigantic reptile of all, the first film of which came out the very next year.

The movie follows Professor Tom Nesbitt (Christian), the sole witness to the existence of a giant, 100 million year old carnivorous dinosaur (Rhedosaurus) that was thawed from the ice by a nuclear blast detonated in the Arctic Circle. The monster makes its way down the East Coast of North America, wreaking destruction as it goes. Soon enough it arrives at New York City, rising from the sea to prey on the hopeless civilians. Things are further complicated by a mysterious prehistoric disease carried by the beast; killing it would cause the disease to easily spread and kill the world's human population.

The movie was a huge hit, despite its relatively meagre budget, largely for its masterful stop-motion effects by Ray Harryhausen, whose career this movie kick-started; indeed, it still looks pretty good to this day, for a '50s movie.

The story was partially inspired by the short story "The Foghorn" by Ray Bradbury.

The Beast from 20,000 Fathoms provides examples of: