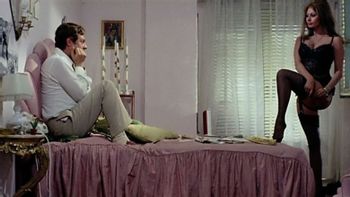 Yesterday, Today, and Tomorrow ("Ieri, oggi, domani") is a 1963 film directed by Vittorio De Sica, starring Sophia Loren and Marcello Mastroianni. It is a comedic Anthology Film consisting of three separate segments linked by nothing more than the presence of Loren and Mastroianni as stars. The three segments, all named after the character that Loren plays, are:

Yesterday, Today, and Tomorrow was the third de Sica film to win the Academy Award for Best Foreign Language Film, after Shoeshine and The Bicycle Thief. Seven years later he won a fourth award for The Garden of the Finzi-Continis.