Film / The Garden of the Finzi-Continis 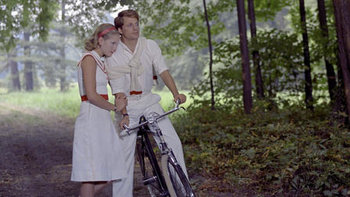 The Garden of the Finzi-Continis is a 1970 Italian drama film directed by Vittorio De Sica.

The film covers events from 1938 to 1943 in the town of Ferrara. At the start of the film Fascist Italy, prior to this date not at all antisemitic, has followed the lead of Benito Mussolini's German masters and passed anti-Jewish race laws. Since the Jews of Ferrara are no longer allowed to play tennis in the local tennis club, they go to the home of the Finzi-Continis, an absurdly wealthy Jewish family who live in an enormous mansion on an estate that is protected by high walls and boasts spacious gardens as well as a tennis court. Their great wealth and high walls insulate them from the gradually deteriorating conditions of life for Italy's other Jews.

Giorgio is the son of a middle-class Jewish family, long friends of the Finzi-Continis; he plays tennis on their court and studies with the Finzi-Contini patriarch, a professor. Giorgio is desperately in love with Micòl Finzi-Contini, the professor's dazzlingly beautiful daughter and his friend since childhood, but her feelings towards him are more ambiguous. Other people in their social circle include Micòl's brother Alberto, Giorgio's brother Ernesto, another local Jew named Bruno Lattes, and Giampiero Malnate, who is a Gentile but an anti-fascist.