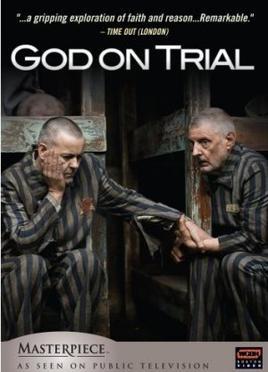 A 2008 BBC film set in Auschwitz, wherein the imprisoned Jews put God on trial for breach of contract. Some of them assert that God has broken the covenant with Israel by allowing the Holocaust. The play is almost set entirely in a single barracks, with almost all of the 'action' being the debate between the Jews.
Advertisement:

Despite having a plethora of atheist arguments to pose against God's existence, even the Jews who conclude that God has abandoned them do not conclude that God isn't real, just that he is in breach of contract, or has sided with the Nazis, making a new covenant with a new chosen people.

The film has a framing device wherein modern-day visitors to Auschwitz are told of the story of the trial.

God on Trial provides examples of: