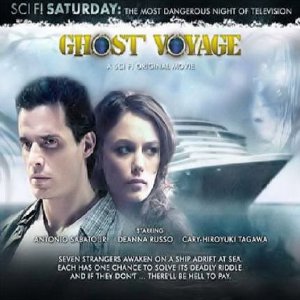 Almost looks like a cover of Titanic (1997).
Mary had a row boat the row boat had a bell. Mary went to heaven the row boat went to... *insane laughter*
Advertisement:

The plot deals with nine strangers, most of whom are engaged in criminal and/or morally questionable acts, who wake up on an apparently abandoned cargo ship with no memory of how they arrived there. The ship's steward soon appears and explains "the rules" to them: First, do not breach any closed doors. Second, do not enter the captain's quarters. Third, do not refuse any orders from a member of the crew. They soon learn two things: that the ship is haunted by malevolent spirits, and the ship is taking them to hell.