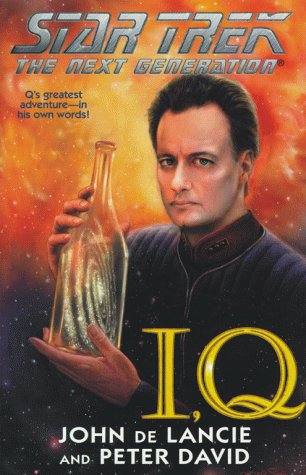 "Know you that I, Q, am the trickster. I, Q, am the lord of chaos. I, Q, defy you to the last, and if you think you can stop me by ending the universe, then I'm here to tell you that you're going to have to do better than that!"
— Q
Advertisement:

I, Q is a standalone Star Trek novel set mainly in The Next Generation era. Published in 1999, I, Q was co-authored by Star Trek writer Peter David and Q's actor John de Lancie.

The main story is narrated by Q, the character that John de Lancie played in various Star Trek episodes. Q's story begins with him and his family enjoying some deep sea fishing at the bottom of a mighty ocean. (The Q family is omnipotent, the crushing depths of a mere ocean is nothing to them.) Suddenly a giant fissure opens up on the ocean floor, and a massive whirlpool above it begins to pull everything in the ocean down into the newly formed canyon, including Q's wife and son. Strangely enough, the whirlpool disaster wasn't exclusive to just the one ocean. Every body of water in the galaxy was completely drained into the single canyon, even virtual bodies of water like the holodeck environment Picard and Data were fishing in. Fortunately, Q was able to save himself, Picard, and Data; unfortunately, Q was unable to save his family, and is now mad as a hornet about their disappearance.

Q, Picard, and Data grudgingly decide to team up to find out what caused the metaphysical whirlpool, albeit for different reasons. Picard and Data fear the possibility that the universe is ending, Q only cares about finding his wife and son. Either way, the three have to work together to figure out what kind of force is behind it all.