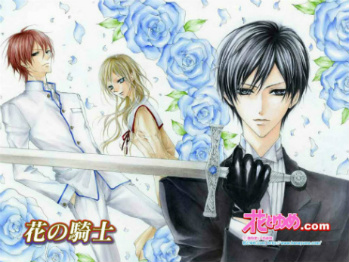 "I swore it to my brother. I will find the person who attacked Sei-sama and killed my brother without fail, and punish him. And... And then more importantly... I will continue... protecting Sei-sama as her knight."
— Ran Kurono
Advertisement:

Hana no Kishi is a 2010 Shōjo manga series by Mai Nishikata.

The Ohtori family is a wealthy and prestigious family that for generations has always been protected by their twelve knights, subordinate families who serve and defend the Ohtori family and its heir Sei Ohtori. The First Knight who defends them is of the Kurono family—specifically Ran Kurono, who following her older brother Rei's death has taken it upon herself to succeed him and strive as the next First Knight, keeping her gender as a woman a secret in order to do so. However, things will not be easy for Ran and Sei in Saint Rogress Academy, where they will be tested among those that would threaten the Ohtori family and Sei.

As fellow knights seek to challenge Ran for her title for their own ulterior motives of using the Ohtori family's authority, Sei is being tested as the future head of the Ohtori family, and Sei's arranged fiance Ibara Tennou discovers Ran's secret, Ran and Sei struggle to overcome their trials.