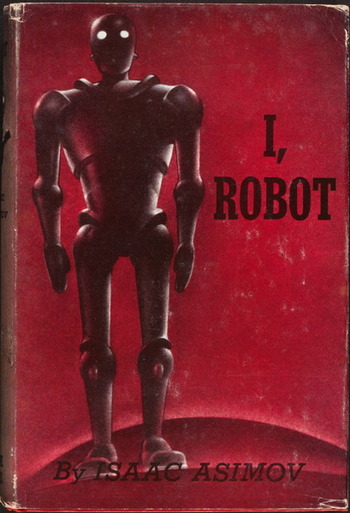 To you, a robot is a robot. Gears and metal; electricity and positrons. Mind and iron! Human-made! If necessary, human-destroyed! But you haven't worked with them, so you don't know them. They're a cleaner better breed than we are.
—Dr Susan Calvin
Advertisement:

First published in 1950 by Dr Asimov with Gnome Press, this collection was edited into a complete Novel by adding a Framing Device of a journalist interviewing Dr Susan Calvin. Together, they tell the history of robots and humans. This volume reprints several stories that were notable for redefining the perception of robots in fiction, introducing the word "robotics", and inventing the Three Laws of Robotics. The stories are essentially a Genre Deconstruction of A.I. Is a Crapshoot, exploring the specific faults in logical reasoning which may cause a robot to conclude that it must behave erratically.

Stories in this collection:

If you are looking for the 1939 short story by Eando Binder from which Asimov's publisher stole the title, click here.

If you are looking for the first arcade video game to use solid 3D rendered raster graphics, created by Atari in 1984, click here.

This book has been continuously in print since it was first published, and has been included in multiple Omnibuses. It has inspired several adaptations/homages, such as The Alan Parsons Project's 1977 album, the 1978 movie screenplay that was published in 1994, the 2004 movie starring Will Smith, and the 2005 short story by Cory Doctorow.

I, Robot provides examples of: