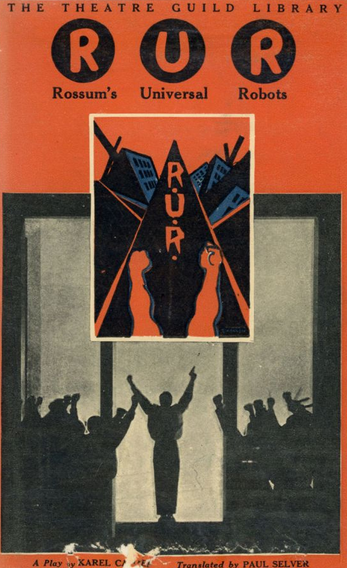 "The best worker is the one who's the cheapest. The one with the fewest needs."
Advertisement:

A play by Karel Čapek, set mostly in an island where they manufacture artificial people called robots, which was released in book form in 1920 and premiered in 1921. R.U.R. — a.k.a. Rossum's Universal Robots — tells a story we might be familiar with.

It opens up in the island where Helena Glory, a member of the League of Humanity, pleads with Harry Domin (or Domain; the General Manager of R.U.R.) for rights for the robots, believing they are people being enslaved. He reveals to her that the robots aren't human, although they look convincingly like them.

Harry explains that while the original inventor Rossum wanted to create a living, working human from synthetic protoplasm that dogs won't eat, his nephew thought that it'd be easier to create simplified human bodies from that same stuff. Harry then explains that this is a good thing; with robots doing all the work, man will overcome the need for toil and poverty will end because robots don't need to be paid, thus making goods cost nothing.

She also meets the human staff of the factory: physiologist and inventor Dr. Gall, robot psychiatrist Dr. Hallemeier (or Hellman), clerk of the works Alquist (the only guy sensible enough to work with his hands), the chief engineer, and managing director Jacob Berman. They're the only other humans in the factory.

After Harry's lecture, she is convinced that the robots really are mindless machines, and her movement was a waste of money. They marry.

Apparently, the robots lacked the ability to sense pain, something which was really counterproductive when robots ended up unintentionally destroying themselves. So they were redesigned to feel exactly that. And then the governments of the world decided that they'd make great soldiers. Outside the island, a rogue robot, Damon, organizes a rebellion. By the time Harry, Helena, and the staff find out... well...

The robots spare Alquist because he does manual labor like them. The robots then found out that the formula for their manufacture was lost (it was destroyed by Helena; Harry wanted to use that as a bargaining tool). Lacking the knowledge to manufacture themselves, with a lifespan of only 10 years, and relying solely on the only human left, the robots (and thus, all intelligent life on Earth) seemed doomed... but we learn they are capable of falling in love with one another, and it is implied that the robots will be able to breed a new race the old fashioned way.

The play is most notable for featuring the very first use of the word "robot", taken from the Czech word for serf labornote or, more precisely, compulsory unpaid labour in a feudal system

. (Capek credited his brother Josef for coming up with the new word). The term took off like wildfire through numerous languages, despite the play's own robots being quite different from the modern concept of the term.