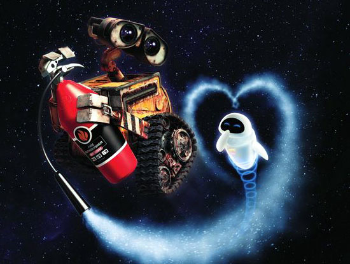 Robots and Artificial Intelligences are supposed to be these cold and calculating beings bound by carefully constructed programming and code. Sure, they could display emotions, or at least something resembling them; but love? That one emotion even organic beings have trouble understanding? Surely that has to be a totally different story, right?

Well, it turns out that isn't always the case, and love can bloom amongst those cables and sensors.

Robo Romance covers those moments where non-organic beings, be it robots, AI, or anything along those lines, display romantic emotions towards a fellow mechanical being. Love Tropes can apply just like they would with any regular romance, meaning we can wind up with all sorts of situations, such as both growing to love each other, one of the involved malfunctioning at the other's presence, or one side's romantic advances being thoroughly ignored by lack of interest, emotions, or any trace of sentience whatsoever.

Compare Ridiculously Human Robots, Robo Family, Robosexual (an organic being feels attraction to a mechanical one), Robo Ship (a Shipping pairing involves one or more bots).