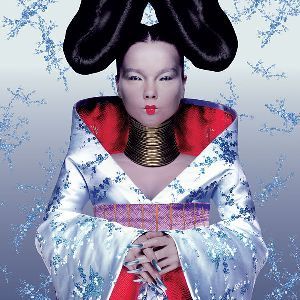 Homogenic is the fourth studio album by Björk, released on September 22, 1997 as the follow-up to Post. It's known for mixing electronic beats with orchestral instruments and for its grand production, and it also serves as sort of a tribute to her homeland of Iceland. Because of its experimental nature, it may not be for everybody, but it definitely is one of the biggest masterpieces of her career.

The album began with small music-making sessions in Björk's London-based home studio alongside audio engineer Mark Dravs. However, the progress in these sessions was halted due to the media sensation caused by stalker Ricardo López, a Björk fan and video diarist who became so obsessed with her that he attempted to kill her with a letter bomb (which was fortunately intercepted before any harm could be done) and videotaped himself committing suicide.

Following this, a shaken-up Björk ended up recording the whole of the album in the studio of a tour drummer that was located in Spain; a portion of the album's introspective and melancholic lyrical nature were influenced by the incident, including the Japanese bonus track "So Broken". Although she initially planned to self-produce the whole album, she enlisted multiple producers like she did with Post, and would've included the likes of the Wu-Tang Clan had they not been busy producing for their album Wu-Tang Forever.

It was extremely well-received by critics and fans alike. Notable songs include "All Is Full of Love", "Jóga", "Hunter", "Bachelorette", and "Alarm Call". It has consistently received critical acclaim from its initial release to this day, and has frequently been hailed as one of the greatest electronica/Trip Hop albums of all time.

All is full of tropes...