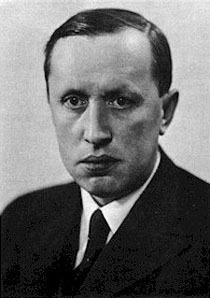 Karel Čapek (1890-1938) was a very influential Czech writer, intellectual, journalist, playwright, translator and amateur photographer who was nominated for the Nobel Prize in Literature seven times. He wrote many works in different genres, but became best known for his science fiction, particularly his 1920 play R.U.R. (for which his brother Josef coined the word "robot") and his 1936 novel War with the Newts. However, in his country of origin, he may nowadays be even more popular for his more lighthearted works, such as Dášeňka, čili Život štěněte ("Dášeňka, or The Life of a Puppy"), a children's book creatively describing the first couple of months of a dog's life, or Povídky z (první a druhé) kapsy ("The Stories from the (First and the Second) Pocket"), a collection of almost-detective short stories with narrative twists. He is also renowned in Czechia for his highly capable use of language (an aspect of his writing that is naturally more difficult to impart to an international audience), and his democratic, humanistic ideals that made him an outspoken opponent of the rise of totalitarianism in the 1930s, particularly Nazism.