Literature / Heart of a Dog 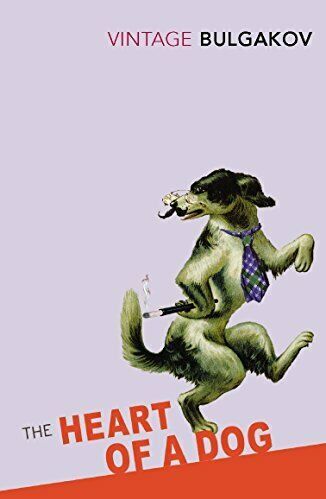 "The whole horror of the situation is that he now has a human heart, not a dog's heart. And about the rottenest heart in all creation!"
Advertisement:

A 1925 novella by Mikhail Bulgakov, about a dog turned by Russian scientists into a human and back. As it was typical of blatantly anti-Soviet works, it was not published in the Soviet Union until Perestroika in 1987.

The narration begins from the perspective of a sickly stray dog freezing to death on the streets of Moscow. The dog is adopted by Professor Filipp Preobrazhensky, a brilliant surgeon who specializes in rejuvenation operations, for an impending experiment, and gradually heals in his absurdly spacious (by Soviet standards) seven-room apartment that also serves as his clinic. However, just as the dog, nicknamed Sharik (a common Russian dog name), begins to acclimatize, it is taken to an unexpected operation by Preobrashenzky and his assistant Dr. Bormental, who implant it with the pituitary gland and testicles of a recently deceased criminal.

While it is meant to be a rejuvenation experiment, unexpectedly to the doctors, Sharik's dog features gradually fade away and he transforms into a man, who, with the encouragement of the house-manager Shvonder, adopts the weird name Poligraf Poligrafovich Sharikov, paralleling absurd "revolutionary" names that were popular in the first few years after the October Revolution. Preobrazhensky wants nothing to do with his creation, constantly belittles Sharikov for his rudeness and simple-mindedness, and forces him to seek support elsewhere, which Shvonder is all too eager to provide. Dealing with Sharikov's whims and transgressions eventually occupies so much of Preobrazhensky's attention that he is forced to practically abandon his surgery work. In the end, after Sharikov's attempt to sic secret police on him, Preobrazhensky turns Sharikov back into a dog.

Critics usually interpret Heart of a Dog as a Take That! against the "New Soviet Man

" archetype that the Bolsheviks were quick to invoke, depicting Sharikov (and Shvonder, who parallels him in many aspects) as a realistic result

of the revolution, embodying its worst qualities; the kind of uncultured collaborationist simpleton that Bulgakov detested.

The book was adapted in 1988 by Vladimir Bortko into a highly successful film, which followed the original text very closely. Bortko later went on to direct a TV miniseries adaptation of Bulgakov's The Master and Margarita.

The Bortko film adaptation provides the above tropes, plus: