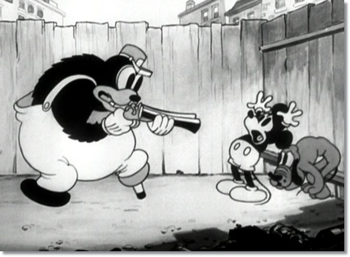 A Forgotten Trope, this trope describes animal control agents who enjoy their job a little too much. They get a sick thrill out of capturing stray dogs, imprisoning them and even putting the poor things down. A tag won't matter to these people, and they are likely to get rid of it so they can get the satisfaction their prisoners are not going to good homes and loving families.

In more comedic works, you'll often see them trying to capture dogs using giant butterfly nets rather than anything that could actually seem effective at capturing a dog. How this is supposed to work is never addressed. In some darker works, however, instead of capturing them, they may just try to kill the dogs on sight with, say, a gun.

Not a very popular trope among modern day dog catchers (more properly referred to as animal control officers), who are more concerned about taking good care of stray animals and finding them a good home. This may have been more Truth in Television in the past, however, due to Values Dissonance on animal welfare. This trope goes hand in hand with Pounds Are Animal Prisons, another relic of the bad old days. Contrast with Right-Hand Attack Dog and Angry Guard Dog, when the dog is actually the pet of the antagonist in its own right.