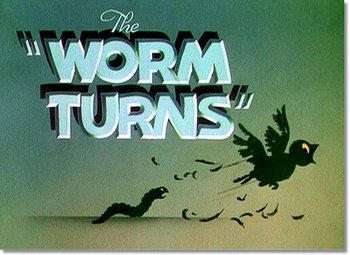 The Worm Turns is a 1937 Mickey Mouse cartoon, directed by Ben Sharpsteen.

Mickey finds a formula for a "Courage Builder" in an old book. He whips some up and discovers it has the power to turn the food chain upside-down, allowing prey to turn on and overcome their predators, as seen when he tests it on various animals.