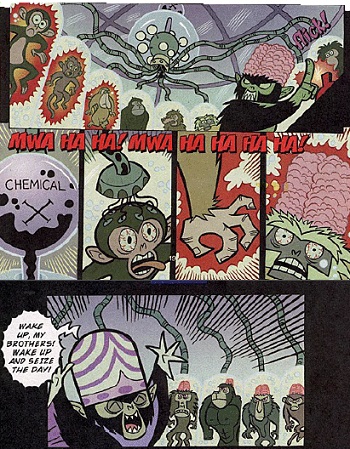 Armies of super-genius giant-brained simians: further proof that Chemistry Can Do Anything.
"Despite his great big muscles and his Really Big Raygun
Jim is still an earthworm but then he's the only one
With a super suit to make him really super strong
Jim can be a winner if you only sing along!"
— Earthworm Jim theme song

A more Sci-Fi oriented version of the Talking Animal, where the creature's ability to think and communicate with people on an equal level isn't typical of their species, but instead the result of some Applied Phlebotinum at work. Perhaps the animal's intelligence has been artificially increased (or inversely, people can communicate with them in their Animal Talk) and/or their physical voice structure altered so they can pronounce human words, or they have been fitted with a Translator Collar; but these animals have come to be more or less equals to human in terms of ability, but their acceptance and status in human society can be questionable.

This rarely becomes an actual plot point; it's usually just an unspoken, world-building background detail so that the author can place a Talking Animal in a setting that wouldn't ordinarily allow for them.