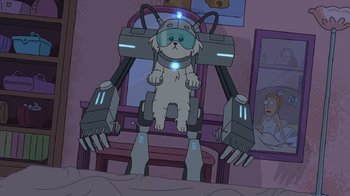 "Where are my testicles, Summer?"
Written by Ryan Ridley
Directed by John Rice
"I thought the whole point of having a dog was to feel superior, Jerry. If I were you, I wouldn't pull that thread."
— Rick Sanchez

Rick equips the Smiths' dog Snuffles with a device that makes him smarter, but the dog soon becomes self-aware and upgrades the technology to lead dogs into a rebellion against mankind. Meanwhile, Rick takes Morty into the dreams of his math teacher in an effort to convince him to give Morty better grades.

"I can't believe how mean Snuffles got just because he's smart. This is why I choose to get C's."