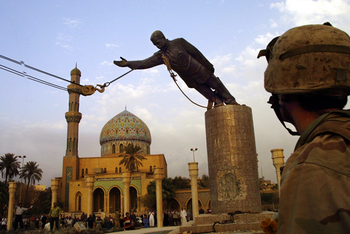 US troops pull down a statue of former ruler Saddam Hussein following the 2003 invasion of Iraq.
Advertisement:

Welcome to Egopolis, seat of power of The Empire! No doubt you're in awe of the mighty statue of The Emperor dominating the town square. This statue was built as a sign of his highness's power and control over the lands and the people of his Empire, which is why when The Hero and his friends invade the town and destroy it, you'll be treated to a dramatic shot of it collapsing.

Nothing quite puts an exclamation point on the downfall of a ruler or a kingdom like the destruction of an effigy of them. Their power and control over the people is broken and to drive it home a statue of them is shown being destroyed in a spectacular, dramatic fashion. Or alternatively, it's already been done, and the rubble of the statue is a sign of the former kingdom and its failure.