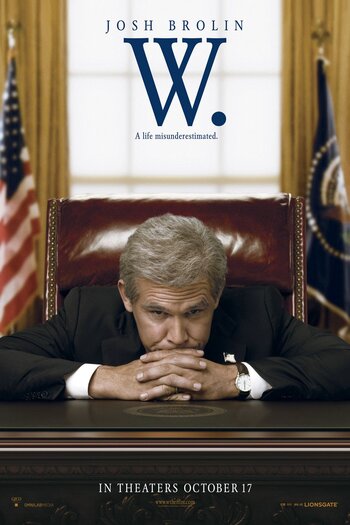 W. (pronounced "Dubya"note After the way it's pronounced in Texas, the state of which Bush was governor, and was a nickname for Bush himself) is a 2008 Biopic of the 43rd President of the United States of America, George W. Bush, that was directed by Oliver Stone and written by his Wall Street screenwriter Stanley Weiser.

A largely sympathetic portrayal of the man (albeit with a bit of satirical edge), it tells the story of Bush's life from his college years to his Presidency, focusing on his administration's push for war with Iraq. Josh Brolin stars in the title role, with a supporting cast including Elizabeth Banks as Laura Bush, James Cromwell as George H. W. Bush, Ellen Burstyn as Barbara Bush, Richard Dreyfuss as Dick Cheney, Jeffrey Wright as Colin Powell, Scott Glenn as Donald Rumsfeld, and Thandiwe Newton as Condoleezza Rice.

The film is notable for being the first Presidential Biopic to be released while the subject was still in office, and the only one until Southside With You and Barry came along in 2016* though, unlike W., neither of those cover Barack Obama's actual presidency. Understandably, the film faced a good deal of controversy when (and even before) it was released, from both sides of the political spectrum - conservatives accused it of being liberal propaganda, and many liberals accused Stone of being too soft on Bush (basically, the same criticisms Stone received for Nixon). It received mixed, but still generally positive reviews, with lots of praise for the uncanny performances by Brolin, Cromwell, and Dreyfuss.

Oliver Stone was later told by Bill Clinton that he had loaned Bush his DVD of W. and that Bush found some parts very sad but liked the film very much.

If you're looking for the Canadian animated shorts about a guy stuck on a desert island, go here.