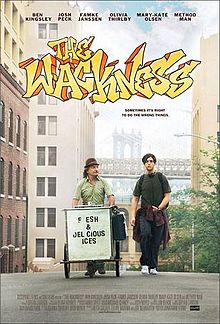 Luke Shapiro and his therapist
Advertisement:

One of the strangest coming of age films you'll ever see. Directed by Jonathan Levine, set in New York in 1994, full of Black Humor and starring Josh Peck as drug dealer Luke Shapiro, who trades weed for therapy with his Hippy Teacher. The usual stoner plot of getting rich quick to stop something bad from happening ensues, because his parents can't pay the mortgage. With his parents' divorce hanging constantly over Luke's head he has somewhat of a disconnected Iron Woobie thing going on. He also masturbates 5 times a day. Also has Mary Kate Olsen in a cameo role.