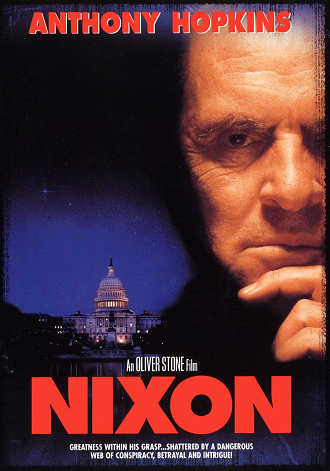 He gained the world, but lost a nation.
Advertisement:

Nixon is a 1995note One year after its subject died biopic of the thirty-seventh President of the United States, directed by Oliver Stone and starring Anthony Hopkins as Richard Nixon. The film explores Nixon and his triumphs and his failings, culminating in his resignation of the office of the presidency in disgrace following the revelation of his abuse of office and executive privilege following the Watergate scandal.

It was the second movie Stone made following JFK, and like the earlier film — an angry, searing and rabble-rousing examination of the assassination of John F. Kennedy — it drew a lot of controversy... but not necessarily for the reasons you'd expect. Unlike the earlier film, which was heavily presented as fact, this movie admits from the start it's based on 'an incomplete historical record' and is intended as less a hatchet job and more an attempt to understand who Nixon was and why he was compelled to act the way he did. As such, it earned critics from both sides; while supporters of Nixon (including his daughters) disowned it as inaccurate (in particular, it was argued that the depiction of Nixon and his wife's alcoholism and pill addiction was grossly exaggerated), some critics of Nixon argued that it wasn't harsh enough on the former president in that, while hardly downplaying his faults, it suggested that there was the potential (and even the realization) of greatness in the man. Stone would later paint a similar portrait of George W. Bush in the eponymous W..

The plot is largely non-linear, at least for the first half, and essentially involves Nixon flashing back through his past as he listens to his secret tape recordings as the Watergate scandal intensifies, the tapes triggering memories of his childhood, his unsuccessful campaign for president against John F. Kennedy in 1960 and his wilderness years following an equally unsuccessful campaign for governor of California in 1962. The second half follows a more linear form, kicking off when Nixon is elected President in 1968, and follows his presidency through Vietnam, his groundbreaking visit to China and, of course, Watergate.