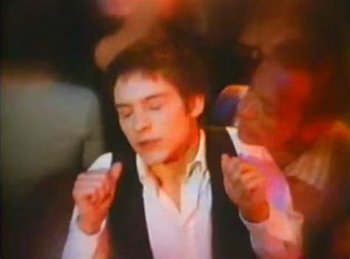 Rich gets his groove on.
Advertisement:

Duke of Groove is a 1996 short film (32 minutes) directed by Griffin Dunne.

Rich Cooper is a boy in his late teens in Los Angeles, circa 1969-70. One night his mother Rebecka asks him out of nowhere to accompany her to a party, because his father is out that night and she doesn't want to go alone. When she tells Rich that her friend said none other than Janis Joplin is supposed to stop by the party after a gig, Rich eagerly agrees. A wild evening ensuses—but there's a surprise at the end.