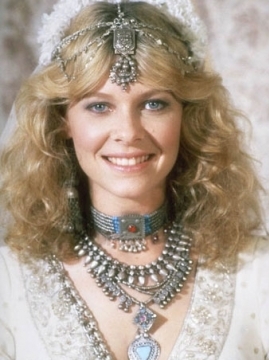 Kathleen "Kate" Capshaw Spielberg (born Kathleen Sue Nail on November 3, 1953 in Fort Worth, Texas) is an American actor most famous for starring in Indiana Jones and the Temple of Doom as Willie Scott, or for attending pretty much every Oscars ceremony since the 90s despite not actually having acted in anything since 2001. She's had one Academy Award nomination herself, for the 1996 short film Duke of Groove. Her (second) husband is the director Steven Spielberg, her (eldest) daughter is the actress Jessica Capshaw and her (second) daughter is the singer/actress Sasha Spielberg.

In 1999 she helped produce the film The Love Letter, a confusing lesbian story written by and starring Ellen DeGeneres, which she also starred in alongside two of her daughters (Jessica and Sasha), and also played a lesbian to positive reviews but mixed controversy in 2001's A Girl Thing. She has 7 childrennote In age order: Jessica Capshaw, Max Spielberg (step-son), Theo Capshaw-Spielberg (adopted when single), Sasha Spielberg, Sawyer Spielberg, Mikaela George (adopted with Steven Spielberg), and Destry Spielberg, with a 15 year age gap between the eldest (August 1976) and the second (May 1990) that she actually gave birth to, and over 20 years between the eldest and youngest (December 1996).

She converted to Judaism in the late 80s/early 90s, which is suggested to have encouraged Spielberg to finally make Schindler's List. Before becoming an actress she was a Special Ed teacher in Missouri, her first husband a marketing manager, and they raised their daughter with a relatively quiet life. Then she moved to LA.

And, for what it's worth, while she may have met Spielberg on the set of Temple of Doom, neither of them really like the movie.

Filmography with pages on this wiki: