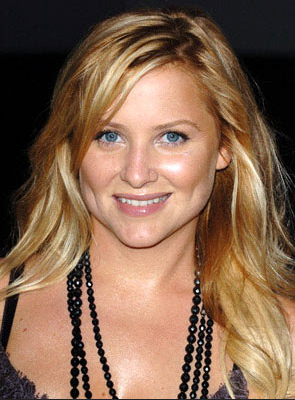 Jessica Capshaw (born August 9, 1976 in Columbia, Missouri) is an American actress from a rather famous set of parents, but seems to defy nepotism by keeping the lesser-known last name. Her biological mother is actress Kate Capshaw, with whom she co-starred in the films The Love Letter and The Locusts, and whose husband is Steven Spielberg — her stepfather since the age of 15. From her three parents she has 10 siblings, being more than 20 years older than some.

She attended Brown and RADA (The Royal Academy of the Dramatic Arts in London), apparently working her butt off to earn her career.

She is best known for her roles in the TV shows Odd Man Out as Jordan Whitney, The Practice as Jamie Stringer and Grey's Anatomy as Arizona Robbins. She was also in the horror film Valentine acting alongside Katherine Heigl (whose character was a doctor) before working with her on Grey's (as pretty blondes in a horror film, they both die, something Shonda Rhimes didn't manage to do), as well as the divorce-focused film Denial with Patrick Dempsey, and had a recurring role in The L Word as Fille Fatale Nadia. Among her other roles include quite a big part in the film Minority Report. However, her first film job was as an intern working on Schindler's List, and we can only assume the job specifics were "prevent your siblings from watching anything".