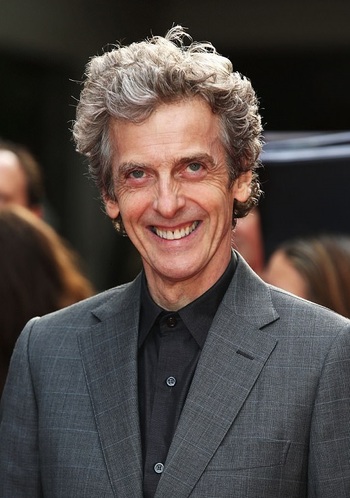 Hey, if you'd been cast to star in your favourite TV show, you'd be smiling too!
"Everywhere I go, I am The Doctor, and everyone smiles at me - they are pleased to see Doctor Who, who's far more exciting than I am."
"Don't forget to subscribe to the official Doctor Who Youtube Channel!"
Advertisement:

Peter Dougan Capaldi (born 14 April 1958 in Glasgow, Scotland) is a Scottish actor from Glasgow. No, he's not a Violent Glaswegian, but he plays a lot of them on TV — and boy has he had an extensive TV career, as well as a somewhat less extensive film career. In 1995, he won a Best Live Action Short Film Oscar for writing and directing Franz Kafka's It's a Wonderful Life, and he also has two BAFTA Awards to his name. His acting work ranges from World War Z to Skins to Cardinal Richelieu in a 2014 BBC adaptation of The Three Musketeers to what was his most famous role until 2013: Malcolm Tucker in The Thick of It.

In 2013 he was cast as the Twelfth Doctor in Doctor Who, succeeding Matt Smith. A fan since childhood, he wrote a letter to the BBC's Radio Times when he was 15, and later wrote articles and submitted art to the show's various fan magazines. He wasn't even new to appearing on the series, having made a previous appearance on the show as a different characternote  Making him the only other actor, along with Colin Baker, to appear in Doctor Who before getting cast as the new Doctor, though David Bradley also appeared as the First Doctor after playing a villain on the show.; he also appeared in the spinoff Torchwood as an Anti-Villain in the Children of Earth miniseries.

His first appearance as the Twelfth Doctor was a cameo in the 50th anniversary special "The Day of the Doctor", in which only his hand (pulling a lever on the TARDIS) and his eyes (apparently glaring) were seen. The latter shot gained its own fan club

, and once Twelve took centre stage in the show, the legend only grew further. On January 30, 2017, he announced that his third series as the Doctor would be his last, with Jodie Whittaker announced as his successor on July 16, 2017. His final story (so far...) as the Twelfth Doctor, the Christmas Episode "Twice Upon a Time", aired December 25 of that year.

Being a massive Doctor Who nerd and briefly channelling the Doctor, on his first day on set someone told him how to operate the TARDIS. He corrected them with "[I said] I know how to work this. You don't have to tell me how to work this. I know."

Note: He has no relation with Francesca Capaldi — she's NOT his daughter! He is, however, distantly related to the Scottish singer-songwriter Lewis Capaldi (second cousin once removed), and Peter played the central role in the first music video of Lewis's eventual Sleeper Hit single "Someone You Loved

". Coincidentally, working in the video was the first time they met.

Second note: Yes, his eyebrows are actually that massive. And, yes, they're really his.