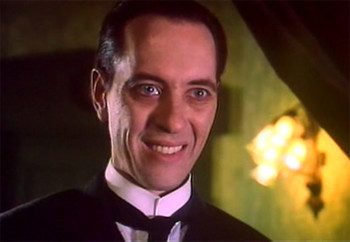 The perfect marriage of actor and role, really
"As Gregor Samsa awoke one morning from uneasy dreams he found himself transformed in his bed into a gigantic...what?"
Advertisement:

Franz Kafka's It's a Wonderful Life is a 1993 short comic film written and directed by Peter Capaldi. It won its director the BAFTA Award for Best Short Film in 1994, and the Academy Award for Best Live Action Short Film (tying with "Trevor") in 1995.

Franz Kafka (played by Richard E. Grant, twitchy and weird as always) is sitting in his apartment on Christmas Eve, working on the story that will become The Metamorphosis. He is utterly stuck on the first line, unfortunately, unable to decide just what Gregor Samsa should turn into. Worse, he keeps getting interrupted. First, there's Woland, a very creepy knife-sharpener who comes to Kafka's door looking for work, but soon loses his "little friend". Then there is the downstairs Christmas party, where a lot of young ladies in white dresses are dancing and singing and generally acting in just the opposite way of how Kafka acts. Then there's a woman, played by Phyllis Logan (Mrs. Hughes from Downton Abbey), who shows up at Kafka's door with a delivery: a giant bug costume.

Franz Kafka's It's a Wonderful Life provides examples of: