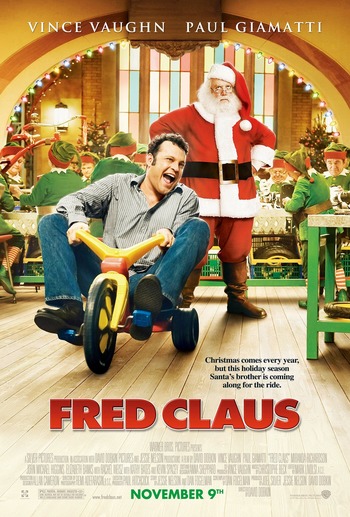 A 2007 comedy directed by David Dobkin about Santa Claus' estranged older brother, Fred. In the opening prologue, we see that Nicholas and Frederick are two happy siblings. Each year, around Christmastime, Nicholas starts getting more and more charitable. He gives away all his own gifts to poorer children. With their parents constantly praising his kindness, Frederick grows more and more resentful. Trying to show off his own selflessness, Fred makes a birdhouse. Unfortunately, as soon as it's hung-up, Nick saws down the tree to decorate the house. That was the final straw for Fred.

Now, what most legends don't tell us (at least according to this movie) is that when a person is declared a Saint, the aging process slows down not just for them, but for their family as well.

Skip ahead two hundred years, Fred (Vince Vaughn) is a small-time hustler living in Chicago who appears to be in his 40s. He lives with his English girlfriend (who grows tired of him never having a stable life) and acts as a father figure to an orphaned boy. When his latest scam finally catches up to him (operating his own personal Salvation Army kettle), the only way he can post bail is by calling Nick (Paul Giamatti) for a favor. Despite his brother's callousness, Nick is more than willing to help, though Mrs. Claus (Miranda Richardson) is skeptical. As a compromise, Fred is willing to come up to the North Pole and do a little helping out. Meanwhile, greedy lawyer Clyde Northcutt (Kevin Spacey) tells Nick that he has three days to save his company from being shut down. It seems this year's Christmas' only hope lies in the irresponsible, chaotic Fred.