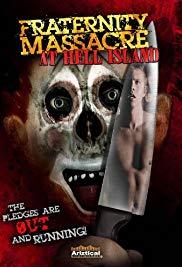 A Comedy with Bloodshed
Advertisement:

Jack Jones is a young, closeted gay man who is pledging for the Zeta Alpha Pro Fraternity. It's now their Hell Night, and the pledges are taken to an island resort, closed for the season, to be hazed. Unfortunately, a lunatic has donned a clown suit and is killing all the frat bros. Meanwhile, a group of ghosts seek to trap the frat in their predicament. Can Jack save the day and come out to his friends?