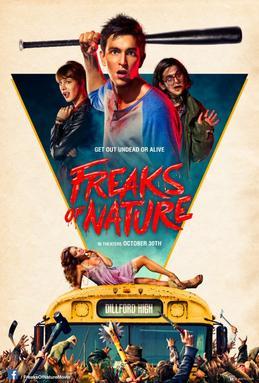 Get out undead or alive
Advertisement:

A 2015 comedy horror movie directed by Robert Pickering, it revolves around Dag Parker (played by Nicholas Braun), a human teenager that lives on the small town of Dillford which has a dark secret: vampires and zombies live alongside its townspeople. They lived in a very delicate, but peaceful harmony up until the day that an invasion happens throwing the town off the balance. Now its every man for himself, with vampires and zombies preying on the others while the aliens are indiscriminately abducting everyone they find. Now its up to Dag and his other two monstrous friends, the zombie Ned (Josh Fadem) and the vampire Petra (Mackenzie Davis), to find a way to unite the three people from killing each other and stand together with the alien threat.

The movie was released by Colombia Pictures in a very limited release and yet boasts some impressive star power such as Denis Leary, Patton Oswalt, Vanessa Hudgens, Joan Cusack, Mae Whitman and Werner Herzog.

Freaks of Natures provides examples of: