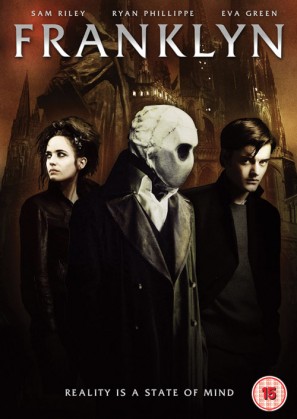 "Somebody once said that religion was deemed by the commoners as true, by the wise as false, and by the rulers as useful. The only thing I believe is that my name is Jonathan Preest. And tonight, I'm gonna kill a man."
— Preest
Advertisement:

Franklyn is a 2008 British film directed by Gerald McMorrow and starring Eva Green, Ryan Phillppe, Sam Riley and Bernard Hill. Split between London and the gloomy metropolis that is Meanwhile City, the plot revolves around an art student obsessed with death, a young man recently left at the altar who is in search of true love, a masked vigilante who stalks Meanwhile City in pursuit of the enigmatic Individual and a father searching for his missing son. As the film progresses, these seemingly unconnected tales are tied together as Preest closes in on his objective.

Not to be confused with Franklin the Turtle.