Are You Sure You Want to Do That? 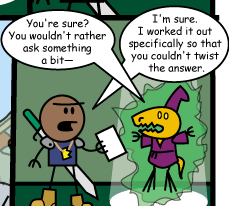 "You've gotta ask yourself one question: 'Do I feel lucky?' Well, do ya, punk?"
— Harry Callahan, Dirty Harry
Advertisement:

A phrase said by one character as a subtle warning to another character that their next proposed action is likely to be a big mistake. Trope Codifier is Atticus Finch of To Kill a Mockingbird.

It doesn't have to be those exact words. Any question of this type that is a neutral call for confirmation or clarification on the surface, but is loaded with implied danger if the speaker gets the answer wrong, falls under this trope. The speaker is giving whoever is about to make the error a chance to back away from the edge of a precipice before they plummet over into the abyss.

Being asked this is a red flag that you are dealing with The Trickster. If you're being asked it while under said trickster's wing, that makes the character a Trickster Mentor as well, the kind of mentor who prefers to let their students make their own mistakes and naturally smooth out the rough edges before teaching them the final touches... but they can't help themselves from issuing a subtle warning that they know the bold or chronically indecisive are ultimately going to ignore. (It's fun to watch them fluster over the choice before getting it wrong anyway, after all, and a mentor has to have fun, right?) It's also the favorite disclaimer of the Literal Genie.

Of course, this may be used in a serious context later on when used on a villain who is about to make their own grave, ruin their own plan, or otherwise screw things up for Team Evil. This may also be used as a Call-Back to the original question to the hero under tuition; all the more appropriate if the question comes from the student themselves. After once being played straight, it is sometimes used as a bluff to unnerve an opponent from making a good move. However, it's rarely if ever a bluff the first time, and it's likewise unheard of for someone to take the hint when it's not a bluff.