WARNING: This is a major Wham Episode with a revelation about a main character that completely shatters the status quo of the series, and it cannot be discussed without spoiling its plot twist. If you have not watched this episode and all episodes before it, please, read at your own risk. 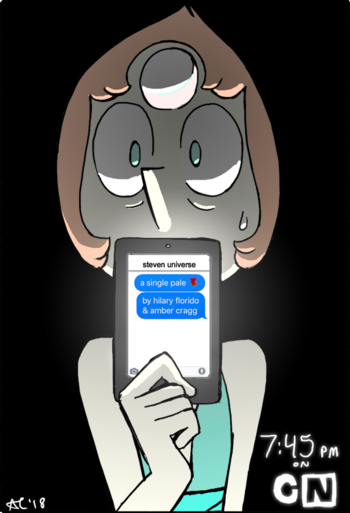 "I've wanted to tell you for so long..."
Advertisement:

Steven reminisces about what he knows so far about Pink Diamond just as Amethyst and Pearl enter the house; Amethyst is certainly puzzled about why Pearl only uses her phone to tell time. Steven, all the while, is stressfully bursting with questions.

Steven wants to ask Pearl about his vision of who really shattered Pink Diamond. Pearl is extremely reluctant to answer, but she later texts Steven that she would like to answer his question. The only problem is that she couldn't have texted Steven, as she hasn't used her phone all day. And while they are talking, Pearl apparently sends Steven another text.

Pearl had stored that phone within her gem, and realizes that some part of her psyche is using it. She asks him to travel within her gem to retrieve her phone while she holds onto his, and to text back once he finds it so she can pull him back out.

First, Steven ends up in a compartmentalized area featuring another Pearl who organizes all of her stored possessions. Steven asks the whereabouts of the phone, and she responds that it may be with the "other Pearls", but advises him not to go to where they are because it's a "mess". Steven insists, and Pearl takes him inside her gemstone yet again.

Then, Steven sees a weeping Pearl, reacting badly to the news of Rose's pregnancy. Seeing that she's clearly not in the best state to give any important answers, Steven delves deeper into Pearl's mind.

The next memory is completely jarring, as Steven and another Pearl are right in the aftermath of the Gem War, and she blankly asks herself why she did "it". Without another word from her, he is taken through her gemstone once again.

Eventually, Steven reaches the scene where Rose Quartz has just shattered Pink Diamond, gem shards flying everywhere. However, this "Rose" is revealed to be a shapeshifted Pearl. Steven sadly takes this as confirmation that Pearl was the one who shattered Pink Diamond... until Pearl holds her hand out, revealing Pink Diamond's very much not-shattered gem. A confused Steven is promptly taken into Pearl's gemstone one final time.

Inside Pink Diamond's palanquin, Steven overhears a conversation between Rose and Pearl, who is in a colorful dress, behind the throne. He walks over to listen more closely, but remains hidden from view.

Rose: ...And then you'll be done. It's going to be easy!
Pearl: There's got to be another way. I mean, maybe–
Rose: Blue and Yellow don't care. They never have. This is "Pink Diamond's colony". We can end it all right here, right now.
Pearl: You know this is crazy, right? [Rose nods] Your status, my purpose... None of it will matter anymore. [Rose nods more excitedly] This will change everything.
Rose: I know! Isn't it exciting?
Pearl: [sighs, then blushes] It is.
Rose: We can leave our old lives behind. If this is really my world, I want to give it to the Crystal Gems. I want to live here, with human beings. I want to live here with you. We'll both finally be free.

Pearl: I can't believe I'm going to do this...
Rose: ...I can't exactly shatter myself.

and then they embrace in a loving hug.

Immediately after doing that, Rose Quartz then shapeshifts into...

After stepping outside of the palanquin a bit, Pink shows Pearl a handful of dirt with the head of a single pink hibiscus, and gives Pearl the flower (which she gladly puts in her hair). Pink then crushes the dirt into fake diamond shards.

Pink then swallows the fake gem shards. Before she leaves, Pink gives Pearl one last order as a Diamond:

Pink: No one can ever find out we did this. I never want to look back. So, for my last order to you as a Diamond... [covering Pearl's mouth with her — and both of Pearl's — own hands] Please, let's never speak of this again. No one can know.

After Pink leaves her palanquin, Pearl then turns to Steven, and holds out her cellphone, apologizing for making him come all this way. Steven speechlessly takes the phone as Pearl shapeshifts into "Rose" to stage the fake "shattering".

After Steven texts Pearl that he found her phone, she pulls him out of her gemstone. He sees more of Pearl's memories, this time in rapid-fire flashes, as he's exiting.

Finally back outside, Pearl tearfully says that she wanted to tell Steven for a very long time. Steven somberly takes in the very shocking fact that his own mother was in fact Pink Diamond.

Standing right behind him, Amethyst and Garnet are in complete shock.

And the episode abruptly ends with no Iris Out whatsoever.

Steven learns the real truth about his Mom.

Steven learns the real truth about his Mom.