The following contain unmarked spoilers for all Marvel Cinematic Universe works preceding this movie. Read at your own risk. 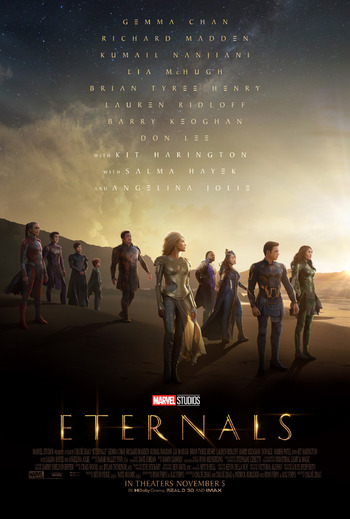 In the beginning...note From left to right: Makkari, Kingo, Druig, Sprite, Gilgamesh, Thena, Phastos, Ajak, Ikaris, and Sersi.
"We have watched, and guided. We have helped them progress, and seen them accomplish wonders. Throughout the years, we have never interfered. Until... now."
— Ajak
Advertisement:

Eternals is a 2021 sci-fi/superhero film co-written and directed by Chloé Zhao (Nomadland), and based on the Marvel Comics series The Eternals initially created by Jack Kirby. It is the 26th theatrical film and 30th overall installment of the Marvel Cinematic Universe, and the seventh installment of Phase 4.

For over 7,000 years, a group of ageless superpowered beings known as the Eternals, sent to Earth by the powerful cosmic deities known as the Celestials, have secretly been assisting humanity throughout their history while defending them from their evil counterparts, a monstrous race known as the Deviants, never directly intervening in any major conflicts unless the Deviants were involved. Centuries after the Eternals' mission to defeat them seemingly ended, Deviants have reappeared in the present day. With the Avengers seemingly disbanded, the ten Eternals must reunite in order to defend the planet from their ancient enemy… all while an event known as "the Emergence" is set to happen in only seven days.

The film was released on November 5, 2021. A Disney+ release date was subsequently announced for January 12, 2022.

Example of:
My Grandson, Myself