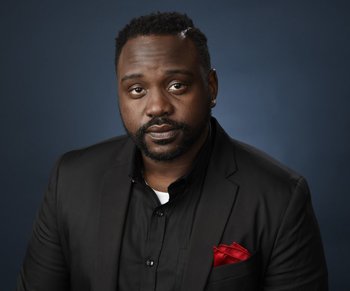 "You can't share your magic with everyone. Your job is to live within your magic. And if other magical people find you, then let's go and make a brew."
Advertisement:

Born in Fayetteville, North Carolina, Henry attended Morehouse College in Atlanta, Georgia for business and drama before earning his Master's degree in the latter from Yale.

His first major role was playing General Butt Fucking Naked in the original Broadway cast of The Book of Mormon. He was later cast in role of Alfred "Paper Boi" Miles in Atlanta, for which he received an Emmy nomination for Best Supporting Actor. Since then he has gained a reputation as a talented and versatile character actor in films, as well as for appearing in the 2018 Broadway revival of Lobby Hero (for which he received Tony and Drama Desk nominations for Best Featured Actor in a play).