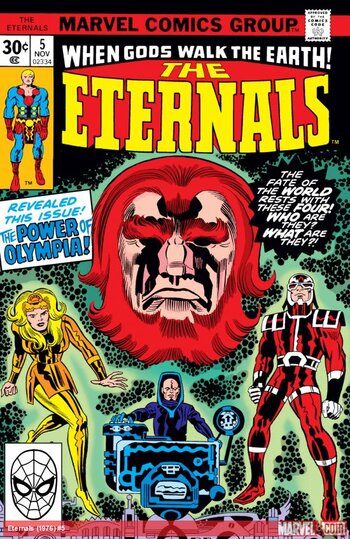 The Eternals is a Marvel comic book series, originally created by Jack Kirby. Premiering in 1976, it was the story of the Eternals, a race of nigh-immortal humanoids created by the giant Celestials to defend humanity against the monstrous Deviants. The original series ran for 19 issues (and one annual) before being cancelled, leaving several plotlines unresolved.

Later appearances in The Avengers and back-up strips in What If? connected Kirby’s Eternals to Jim Starlin’s Titans, establishing that the Titan leader Mentor was actually A’Lars, brother to Kirby’s Eternal leader Zuras. All of which also meant that villain Thanos was descended from Earth’s Eternals.

A 12-issue miniseries starring the Eternals was released in 1985, mostly written by Peter B. Gillis (Walt Simonson took over as writer for the last four issues), but it failed to inspire an ongoing series.

A one-shot 1991 comic by Dann Thomas, Roy Thomas and Mark Texeira - Eternals: The Herod Factor - was the next story to feature the Eternals as stars rather than supporting cast.

In 2000, another one-shot comic by Karl Bollers and Mike Higgins - New Eternals: Apocalypse Now - relaunched them as a more traditional superhero team, with code names and several new Eternals introduced alongside the original core cast. Again, it failed to inspire a longer series, and this approach wasn’t followed up elsewhere.

In 2003, Chuck Austen and Kev Walker created an Alternate Continuity version, The Eternal, for the Marvel MAX ‘mature readers’ line. In this series, Eternals are slaves, deployed by Celestials to forcibly evolve lesser creatures into slave labour. But then their leader falls in love - and decides to rebel against the Celestials.

Neil Gaiman and John Romita, Jr. returned to the original Marvel Universe concept for a seven-issue ''Eternals'' miniseries in 2006. In this miniseries, reality has warped and the Eternals now believe that they're just regular humans, but they need to remember who they truly are and regain their powers before their foes awake a buried Celestial - who might destroy the Earth. Gaiman used the reality-warping element to rewrite some of the Eternals’ history and purpose, as well as expand the cast by resurrecting several dead characters.

In 2008 the Gaiman/Romita miniseries was directly followed by a short-lived Eternals ongoing series, written by Charles and Daniel Knauf and initially illustrated by Daniel Acuna.

Following on from this, the Eternals (and Celestials) were again relegated to supporting cast - some aspects of the Gaiman and Knauf series were written out in various ways, and the Eternals themselves were killed off en masse to fuel the initial arc of a relaunched Avengers series.

In 2021, a new series began, written by Kieron Gillen, with art by Esad Ribic. It serves as a soft reboot, building on the Gaiman and Knauf runs with a few retcon amendments - and reintroducing the Eternals and the concepts behind them as the story moves forward.

The second arc of the 2021 series also leads into Marvel's 2022 Crisis Crossover, Judgment Day, which is also written by Gillen, and puts the Eternals at the heart of a major Marvel event for the first time. A related miniseries by Gillen and artist Guiu Vilanova, Death To The Mutants, focuses on the Eternals and their perspective on the event.

A Marvel Cinematic Universe film adaptation titled simply Eternals, was released on November 5, 2021, directed by Chloé Zhao. It marks the debut of the first deaf MCU superhero, played by Lauren Ridloff, as well as the first explicitly queer lead of an MCU film, Phastos, portrayed by Brian Tyree Henry.

(A one-off comic, Eternals Forever, which is not directly related to the Gillen series, was also released just before the film and acts as an introduction to the comic versions of the characters)

Before the standalone film, the Eternals mythology was alluded to in other MCU movies. Guardians of the Galaxy and Guardians of the Galaxy Vol. 2 introduce the concept of Celestials. Infinity War has a reference to Thanos's father A'Lars (Mentor), and Thanos's homeworld of Titan was mentioned. The exact nature of Thanos himself has yet to be established in the MCU, though his brother Eros was introduced in The Stinger for Eternals.