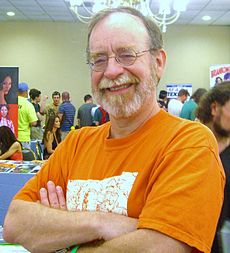 The King of Asgard himself.

Walter "Walt" Simonson (born September 2, 1946) is a comic book writer and artist, perhaps best known for his defining 1983-1987 run both writing and drawing Thor. During this time, he introduced Beta Ray Bill and frog Thor, as well as writing many of the series' most memorable moments ever. (Check out The Mighty Thor - the first fifteen or so are all from his run, and the page picture is possibly the Simonson Thor moment) It's even a meme amongst the fandom that Simonson is "just another guise of Odin".

He followed this with a run on Fantastic Four starting in 1989 and with Art Adams, introduced the New Fantastic Four, a three-issue Spotlight-Stealing Squad of Wolverine, Spider-Man, The Incredible Hulk and Ghost Rider. He is considered one of the few writers to really get Jack Kirby's New Gods characters, and wrote and drew Orion from 2000-02. He drew the famous Uncanny X-Men/New Teen Titans crossover issue, and in the process effectively invented the way that the Source Wall has been portrayed from that point onward

He also wrote or drew the X-Factor X-Men team, some Batman stories, the adaptations of both Close Encounters of the Third Kind and Alien, and the Paul Kirk Manhunter. More recent work includes runs on The Avengers and Indestructible Hulk for Marvel and a graphic novel, The Judas Coin, for DC (which is an extended version of what would have been his issue of DC's art anthology series Solo). He currently writes and draws Ragnarok for IDW Comics, a more mythology-accurate tale of an undead Thor after the other gods have died.

In 2011, he (and Louise) had a cameo in Thor along with fellow Thor writers J. Michael Straczynski and Stan Lee. Notably, while the other two play regular humans, he gets to play an Asgardian at Odin's table! He often works with his wife, Louise Simonson, and letterer John Workman.