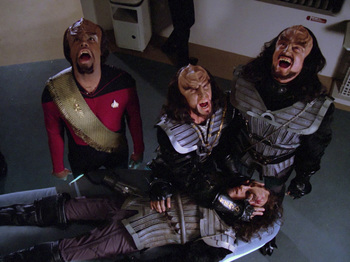 "Beware, a Klingon warrior is about to arrive."
"A voice is heard in Ramah - Rachel, weeping for her children, refusing to be comforted for they are no more."
— Jeremiah 31:15 (and used again in Matthew 2:18)

The "Death Wail". For when words just don't cut it. It's that inarticulate scream of rage and grief when a beloved ally has just become an ex-beloved-ally. It is a sister trope of the Big "NO!", and if done poorly has an extremely good chance of becoming Narm. For the animal variant, see Howl of Sorrow.

Being a death trope, this one's naturally spoiler-heavy, so proceed with caution.